We’re in!  Its so much better already!  I’ve got my very own computer room!  We got done cleaning out the other place in just 2 1/2 hours, easy peasey!  Anyway here some pictures of the new place, before we moved stuff in and after! 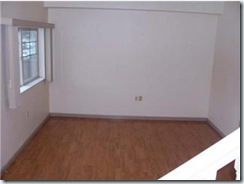 Here is the Living Room, 10 foot ceilings according to the dry wall expert…We now have 6 feet between the couch and the T.V. instead of one. Here’s Jesse and Oscar and they actually have room now in between the couch and TV! Here is a crooked picture of the kitchen, its a “galley” kitchen with a window off the back and then one into the dining room.

So many cabinets!  You have to realize its been years since I’ve had this much counter space and cabinets! Here’s the view from the sink.

Downstairs bathroom, just a sink and toilet…but nice so we don’t have to go up for emergencies.  Opposite this room is a storage closet the same size as the bathroom.  Its almost full already!! There’s Jesse on the stairs, you can barely see Oscar up there.  Those shelves have already been taken over by Oscars books…what little he has at the moment.  He will have more I promise! Here’s view of the big bedroom.  That’s a nice bump up from the stairs, which now holds the TV and game systems and my snow globes. The other view, those are separate closets, and unlike other women, I don’t have a lot of clothes…So I actually only use one of those.  But don’t be impressed I also have a dresser!! Both of the other rooms are the same size, I need decorating tips! Here’s the upstairs bathroom, sink on the outside, tub and toilet in that door.  Its kind of nice to have, and its better then the other place, the door doesn’t hit the toilet!! Oscar’s got the going up pretty good, going down is another story.  I do have him trained already to wait for me and get picked up.  He doesn’t understand how to get down.  We have already installed the baby gate at the bottom of the stairs and at the entry to the kitchen so I don’t have to worry about him in the kitchen getting into everything…unless I’m in there and want him in with me.  Its easier then having baby locks on everything!
So it was a busy weekend, I’m glad we’re all done and settled in, the neighbors aren’t bad at all yet.  I did see a teenaged boy puking out back of the neighbors the other afternoon, a little weird but I just kept walking.  I got in some good cardio though walking back and forth yesterday and I worked up a really good sweat today cleaning, so that was a plus!
Well I better get going, its bed time! 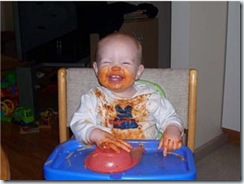